“Ah, I’m so glad that my parents put me here where I am!”, says Joseph with a broad smile. I’m sitting already in the car with a rolled down window because I’m on a good-bye tour after having spent a week with my friends in Kentucky. Normally, men don’t speak so much with women in public, and only if it’s work-related and somehow necessary. Men speak with men, women with women, and I do respect that. But Joseph has to deliver his statement to the outside world. And I’m the departing one, returning into this world where doors open automatically, where one pushes buttons like in my modern rental car simply to ignite the motor, and where seems to be so much less hard work.

A few hours earlier Joseph’s sister-in-law and I were sitting in a small buggy pulled by a pony to check on her sick sister. While holding the reins, Mary suddenly says out of the blue: “My mother couldn’t drive standard shift because of her leg.” I was completely taken by surprise! I knew that her mother as a girl had lost one leg due to a terrible farming accident. As a “strict order” Amish woman, as one calls those that don’t compromise on anything, without electricity, running water, any modern devices, she was raising more than ten or twelve children only on one leg and certainly with not the best prosthesis out there. Mary tells me now in a tone as if it would be the most natural thing in the world that they drove a car for 5 or 6 years till “my father decided that’s not the right thing for us.”

These were two messages from the other side of the aisle, I guess, meaning: Hey, outsider-woman, we know much more about your world than you think!

Joseph also told me that he has one brother who is a professional pilot. I also didn’t know that. That made actually in total two brothers with pilot license! One left the community only a few years ago, as I had heard of, and the other one having always lived a modern life. “One day a plane circled close by, and landed in my meadow,” Joseph said. It was his professional pilot brother with a Super Cub with special wheels, probably with “bush wheels” as I later looked up on Wikipedia: with “large, soft, low pressure balloon-tires designed to absorb impacts from rocks and boulders, and to not sink into sand or other soft surfaces, ideal for off-runway landings”. His brother had decided to visit him when he was nearby, and after an hour he was gone again.

A few days earlier Mary’s husband suggested to visit relatives in a new small community, 1 1/2 hours farther east. We went with my rental car. Six families had just settled into an area of roughly 100 acres. But what a surprise: It seemed they all were hooked up to power lines and had running water. The men wore simple cloth from the store, still having a beard but the hair more modern trimmed, the women still more conservative, with home-made dresses, the hair covered with caps.

We were invited for lunch. The hosts, a family with 7 children seemed to have relatively modern machinery to build portable barns. They used a simple cell phone and probably also had driver licenses. Another neighbor, I heard, just spent a few days in a community in Ecuador. So that meant probably they even had  passports and  Social Security numbers here.

While talking and sharing lunch with the cousin of my friends and his kind family, I scrutinized the children’s faces for small traces of their life style. Were they happy? Were they already a bit spoiled? The children were between one and 14 years old. I saw no tablets, no electronic devices, and one was reading a book. They sat there relatively quietly, and with big eyes as if they wanted to explore my face for some clues too. I guess we didn’t get very far with each other, since we didn’t find our way into a real conversation in such a short time. But after lunch, when I was hungry for a little stroll into the promising forest behind the house, they all joined in, including the mother with the 1 year old. So we walked to a nearby bluff with some big rocks and small canyons and the mother with the long dress and the cap didn’t hesitate to carry the youngster over low hanging branches, thorns and roots. Everyone was at ease and I got even to do a little extra tour by myself where I found under an overhang old traces of a camp fire that the children hadn’t been aware of, as it turned out. What a romantic landscape with maybe even some traces of Indian life! 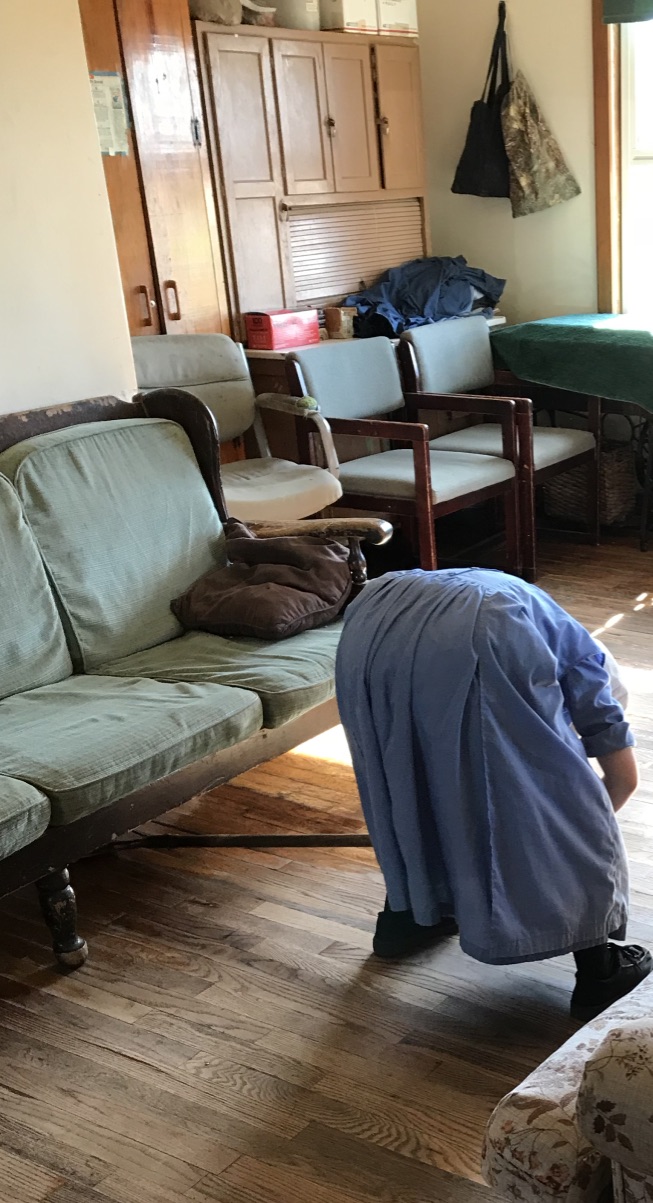 In the end, Mary put her big black Bonnet on top of her cap, her husband put his straw hat on and after a brief stop at a fine home produce market owned by another relative, we headed home to the community we had come from. It was of course not just a drive back from point B to point A, but the return from a community in transition to the radical other end of the spectrum, to a community 100 or 200 years back. The 7 children of my host family between 5 and 16 years old, who had stayed behind – the youngest had come with us – had not only done the whole laundry by hand, they had also canned about 30 jars of apple butter, one had prepared lunch for everyone, and in the end, none of the children thought that was a big deal. Of course they also had done their regular chores like milking the cow, talking care of the calf, fed the horses, gone to school and what not.

Hard to tell what my friends thought of all that, of the visit, of returning to their own different life and how much they had known about the other community in the first place. No comments afterwards and no excited raving about the good work their children had done. “Plain people”, as Amish people call themselves, don’t sing each other’s praises or judge other people in a critical way. They might be sad when, let’s say, someone close like a sibling or a child leaves the community. They are humble and, not to forget, they even tolerate someone like me visiting every year for a week, who lives completely different and doesn’t even share their religious beliefs.

On the same pony-ride up the hill to the sick sister, after talking about the short excursion into modern life, Mary suddenly looked at me and said: “As you know I was very sick myself, years ago,” and then, after a pause, added: “I had plenty of opportunity to look deep into earth, you know, Cornelia, I think you should do this too.”

That was the third message of the day from the other side of the aisle. Somehow that reminded me of their church services in the community hall on Sundays: The women greet each other with a real kiss. They don’t do this with me. I don’t think my Amish friends and I are friends in the way as people are in the outside world. No sweet big words, no different degrees of friendliness since in their humble way everyone is welcomed by them. But they also do – at least in their mind – a bit walking back and forth between the two sides of the aisle, like me, except the other way around. And the warm hugs from women and hearty handshakes from men feel very good for an outsider who is so much attracted by them.